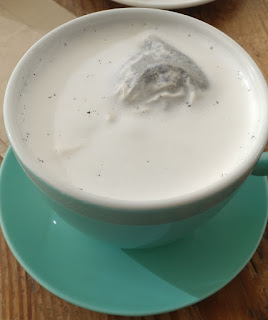 The above beverage is a London Fog, which is a tea-based latte. The basic ingredients of what is my favourite drink are typically as follows:


There are all sorts of variations on the above but that is more or less what I expect. In some cases, you can work with simple syrup and then add real vanilla into it or you can also just use vanilla extract, but the above is what I would be the absolute basics of what you'd need to make it at home.

I've been drinking this beverage as a default in most Metro Vancouver cafes for a good decade and a bit; I first came across it in my university's coffee shop and was immediately hooked. Its origins are disputed, but it has been suggested it originated from a now-defunct place on West 4th Avenue called the Buckwheat Cafe. I've tried to find more details on the place but information is scarce as it existed before the Internet was commonplace (the claim is that it was invented in late 1996) and the digital records on the City of Vancouver Archives website do not make mention of the place anywhere.

At some point I'll have to do more digging and maybe check with the Vancouver Library. I want to know why it was called a London Fog (presumably due to its use of Earl Grey tea), if the stories about its origins written the Internet are true, and maybe a bit more about the shop itself. If you know anything, do drop me a line!

I've been hitting up random cafes I tend to frequent and have compiled a list of what I think about their version of a London Fog. Because some places will do theirs slightly differently than the above recipe, I've opted to skip on mentioning them.


So these are my really ridiculous tasting notes for my favourite beverage. I hope to find out more information about the origins of the London Fog. Once I have dealt with some personal matters in the coming few months, I am going to start digging more into it. I also am going to start making my own at home!
Posted by Unknown at 17:05

Email ThisBlogThis!Share to TwitterShare to FacebookShare to Pinterest
Labels: Personal