MyDataAngel.com is not new and is an outright scam

As evident in this KickStarter and this other one, we've seen countless snake oil being peddled to helpless people who are only looking to protect themselves on the Internet. Well, this time we have a product called DataGateKeeper (DGK), and they're looking for $25,000. Their claims are that it's anti-hacking software that provides encryption levels far more advanced than AES.

Because I hate this sort of crap, I figure it's time to document who these people are and what the product actually is. I should note that I initially wondered if it was a troll (as did Bruce Schneier), but I am now convinced that it is a scam.

I am going to refer to this as MyDataAngel.com or "MDA" as there's a tonne of confusion here due to the iterations this software has goen through. What they're selling is not only not new, it has been attempted to be sold under many different names with various other people involved.

I'd like to thank Ryan O'Horo for helping out form the timeline and provide other tidbits.

Here's an image from their KickStarter: 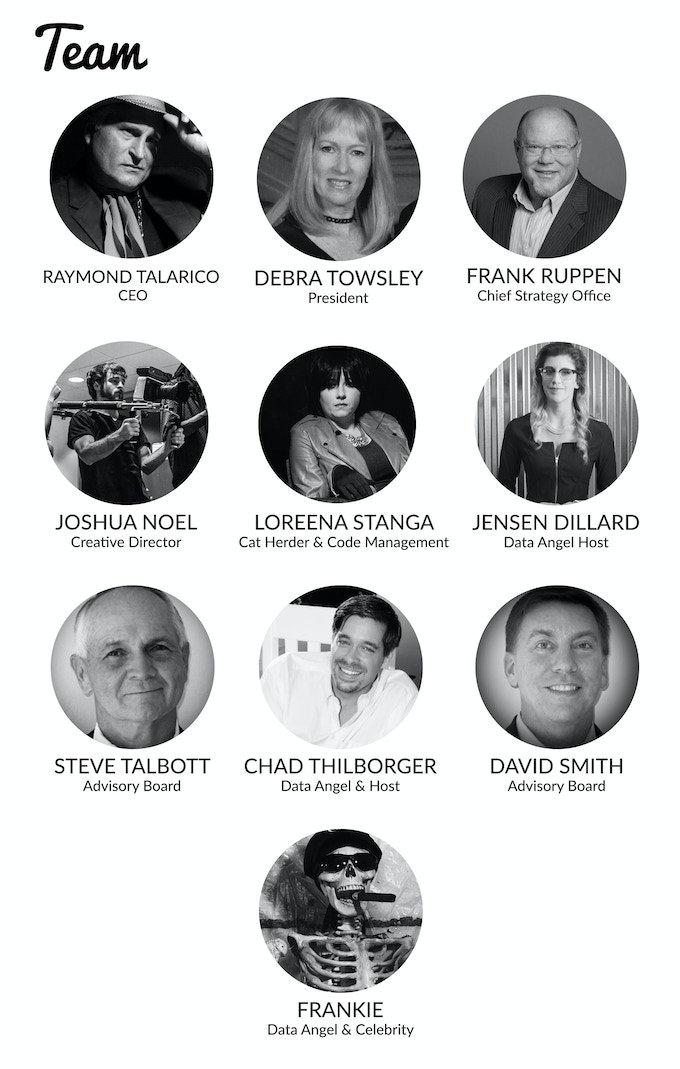 It helps to know who these people are in order to paint a picture of what we're dealing with.

There have been other people involved in the past but I will mention them as I go along. For the most part, the two people of interest should be Towsley and Talarico. I will also mention that there are no cryptographers working for them.

It turns out that Talarico and Towsley are married. You can read this claim in this article from 2006:

Talarico joined family and friends in watching his filly J P Sage take the lead near the final turn and trot on to win the night's 10th race. Talarico, his wife Debra Towsley, and their group then posed with J P Sage for the traditional winner's circle photo.

This detail will help paint a picture of what is going on with this KickStarter. Thanks to Stephen Tinius for pointing out his involvement with APCRG and his relationship status with Towsley.

Before MyDataAngel.com, there were other iterations


Here are some names we should make ourselves familiar with before we go on about how the timeline makes no sense:
And here's an cropped copy of their KickStarter timeline up until now: 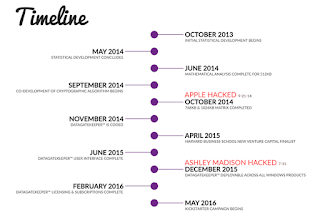 Let me give you guys a better timeline that is more factual:

So what does this all mean? For one, the individuals involved have been scheming for years through the use of holding companies to launch their own ventures.

Sometime shortly before 2010, Centuri Cryptor was written although based on its design, it's really tough to say if it was not started earlier, had an incompetent programmer involved, or was actually written later than what is claimed on LinkedIn. The use of controls reminiscent of Windows 3.1 is really confusing. The first evidence of the application in use does not appear on YouTube until the summer of 2013.

It is at this point that Ilona Mandelbaum arranged a compensation package for Raymond Talarico's involvement in HSC Holdings (the assumed owner of Centuri) several months after Mandelbaum's mining company transitioned into a technology one. A website was launched mentioning Henry Mandelbaum as CTO and Matthew Sage as COO.

Immediately following Talarico's involvement, promotion of Centuri began via Twitter and a supposed, nameless conference in New York City. All of this appeared to be very feckless and a non-starter however.

At some point, Matthew Sage created FileWarden.com and transitioned Centuri over to that company with him and Talarico at the helm. Talarico then resigns from FileWarden just four months later but shortly before Mandelbaum and Sage were issued a cease and desist order by the State of Wisconsin for their business activities in another organization.

Eight months later, Talarico registers MyDataAngel.com, with Henry Mandelbaum (a relative of Ilona) as CTO, Talarico as CEO, and Debra Towsley as President. In November of 2015, work begins on creating a KickStarter and involvement of investors is suggested. And now in May 2016, we have the KickStarter where they're asking for $25,000 USD but with no mention of Henry or Ilona Mandelbaum.


Does the application even exist?


It's really tough to say but probably? The aforementioned YouTube video shows it in use but there are lot of problems with its claims.

The cryptography claims that it's using a kilobyte-sized keyspace is absurd and the idea that AES is weak in contrast to them is just as much. They're offering fifty to one-hundred year protection meanwhile with the right implementation of AES, you could be waiting until the heat-death of the universe to crack the data.

MyDataAngel, DataGateKeeper, Centuri Cryptor, FileWarden, or whatever it is called is complete garbage. They don't need $25,000 to launch this application: it's already available or at least is. 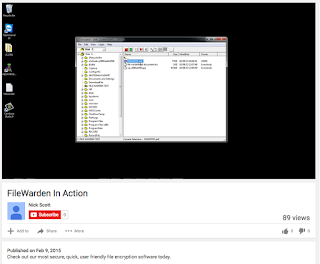 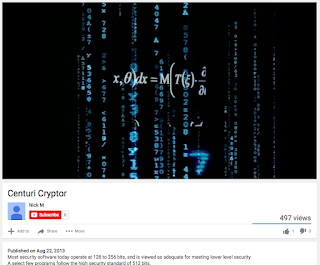 And here's Talarico's video of him using it with Centuri's name being mentioned: 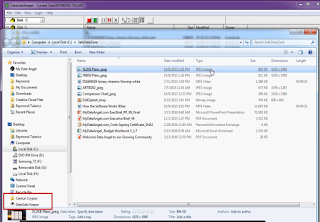 Lastly, for shits and giggles, here are some amusing folders: 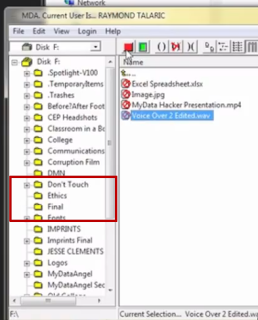 
KickStarter's lack of involvement in addressing these scams is really distressing as there is no legal recourse for someone in the event that it doesn't follow through on its promises. This is the third time that a campaign for security software that's outlandish and I am willing to believe that there will be no response from them on preventing new ones in the future. It's really up to us as a community to pressure these snake oil products from never seeing the light of day.

Raymond Talarico and Debra Towsley don't need the $25,000 either. As evident in the PDFs I've linked to, they claim to have investors and based on the YouTube videos, the software already exists.

This is probably not the last time we'll have to write about this sort of thing either.

I'll close off with this: someone forgot to re-register centuriglobal.com, the former domain of Centuri Cryptor so it now redirects to this blog piece.
Posted by Unknown at 19:52 2 comments:

It's often said that imitation is the sincerest form of flattery. However, I did not expect to ever see my name used to promote some grant scheme where one could make $17,438.27 in just under two weeks.

During a random search, I came across a YouTube account bearing my full name. I only have one account that I use so I was surprised to see a video claiming to be created by me bearing a cheque with my full name.


Now, the video in question has a link to the blog itself (I will not link to it myself) which claims the following:


My life was going great... a great job working at a local engineering firm, a beautiful wife of 4 years and a young son. Sure we had some debt, but really, who doesn't? Then it happened, i lost my job! It was devastating, but the next day i was out looking for a new job. Weeks went by and as hard as i tried to find another job, no one, i mean no one was hiring! All the while our bills kept piling up and my mortgage payments were way behind. We really did think we were going to lose our home!

And then goes on to explain how this whole grant scheme:


One day after a job interview at a local coffee shop, i was about to sit down to enjoy a hot cup of java when i happened to bump into an old high school acquaintance. Turns out he worked for the provincial government and after explaining about my financial problems, he advised me to apply for Canadian Government Grants. I had heard about them but never really looked into it before. He explained that 90% of Canadians qualify for these grants but maybe only 5% of the population actually know about them. He gave me a website to look into and i didn't even finish my coffee, i just rushed home.

Convenient story. The last time I ran into someone from high school that told me of a financial scheme where I could make money, she tried to rope me into some multi-level marketing nonsense.

To add to this, how does one go from having worked at an engineering firm where you're gainfully employed enough to have a mortgage on a home to having needing to apply for a job at a coffee shop? I get that times are tough now in Calgary (where the author claims to be from), but this was written back in 2012 when oil prices were around $90 USD a barrel.

Rolling back here a bit, you might be wondering how a cheque bearing my name (with middle initial no less) made it online. For a bit, I was confused but then I remembered that back in 2003, I was filing my own taxes for the first time and was sent back a cheque for a grand total of $0.07 CAD. The humourous part was that the cost to mail it would have been $0.48 CAD. Since I found it funny, I scanned a copy of the cheque, edited out details, and then posted on a message board.

Years later, I got into the habit of editing Wikipedia to pass the time when I was living away from my hometown. When I came across the article on cheques, it at the time either had no images or didn't have enough so I decided to lend my previous scanned image. The easiest thing to assume here is that this individual decided to use the image in their video because it had a full name to make use of and fit their assumption of how convincing it would be.
I was able to confirm that this was my cheque because the monospace font matches the address I would have had at the time of the cheque's issuance. There are other people out there who have the same name as me, but it definitely was my image being used here.

Back to this whole grants nonsense, there are actual grants you can get as a business or an individual looking to run a business if you fall under some of the following as per this website with a horribly deceptive domain:
As you can see, there are plenty of grants available that can get you a lot of money for your existing business or to get one off of the ground. However, all of these have a lengthy-ish application process and you have to prove what you're looking to do is legitimate. This isn't some scheme where the government will throw $40,000 like the blog suggests for doing absolutely nothing, as you have to commit to doing whatever the government is trying to promote.

These grant scams are not really all that new as there have been reports about them going back to before this blog came into existence in 2012; a more recent article mentioned this scam in 2015.

The photos on the blog itself came from some stock image websites. You can see some of them here: 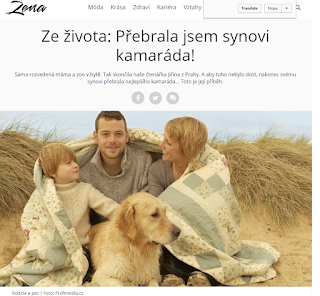 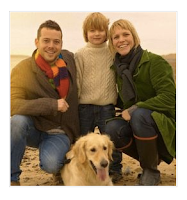 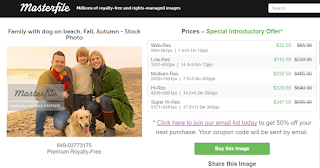 What a very happy family.

If you're curious about the cheque image itself, it was deleted from Wikipedia in 2011 so it doesn't appear to be anywhere on the Internet now. I do now have a cheque for $0.07 from TD due to an overpayment on a loan but I have opted to not deposit to see how long things go before they hound me if at all.