Comcast Breach by the Numbers

As was reported over the past few weeks, about 600,000 usernames and passwords for Comcast users were available for sale. I have come across the data since then and have decided to reveal some stats.

software vuln allowed access to mail servers which contained user emails and plain text passwords lol, enjoy. Do not leak out this link or else i will....do fucking nothing.

comcast claims to have reset all affected accounts..and yet many of them still work just fine, LOL!

yup this was totally from phishing, comcast boxes were totally never breached!

I haven't put these into Canary yet but I have gone through the data for those who wish to know how affected people were. I also believe that based on the contents that something belonging to Comcast (or a third-party) was indeed breached contrary to their official statement.

For the record, I did not purchase the data.

I tweeted this a few days ago, but here are the raw numbers:

What's in the SQL dump?

Interestingly, the SQL table has the following columns:

When you see that Comcast is denying that they suffered a breach and then the attacker claiming that they breached a mail server, you have to wonder what the truth is here when you see a SQL database including details like account IDs, something about migration (to another system maybe?), and the status of the account. There's allegations that this data may have came from a third-party, so perhaps there is some truth in all of this for Comcast, but what was the actual source?

I was curious how many actual customers were affected by this breach so I did two things: I looked for how many accounts were marked as "enabled" and then how many were marked as "suspended", plus a few extra things to see what was going on.

Here's how it all broke down:

The numbers here makes it quite clear that Comcast or a third-party with access to the data suffered a breach.

Where are people affected the most?

In the 27,262 customer addresses and e-mails exposed, 5,994 unique ZIP codes were represented--there are about 43,000 across the whole United States. These were the top-ten ZIP codes that had customers affected:

Of those 27,262 customers, 3,256 of them had their passwords exposed in the password list--assuming that their e-mail addresses' local-parts can be correlated to the "vanityName" field. 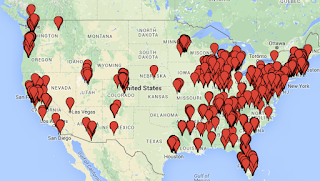 I have created a map that will let you see who's affected. There are some weird quirks due to problems with ZIP codes not matching up with their respective cities, so keep that in mind.


As stated already, Comcast or a third-party was breached and this data was exposed. Comcast owes an explanation to its customers.

I'll be placing the e-mail addresses on Canary as soon as possible.
Posted by Unknown at 19:30

Email ThisBlogThis!Share to TwitterShare to FacebookShare to Pinterest
Labels: Security